Voronezh is a sightseeing city. On its streets there are memorial complexes, reminding of significant events in the history of Voronezh. Also, there are some unusual sculpturs and statues. Some of them are cute and funny, others are reminders of kindness and mercy, third capture the unique moments of ordinary life. Each sculpture has its own story.

Read more about military monuments in Voronezh in our other article.

1. The Kitten from Lizyukov Street

A popular tourist attraction in Voronezh is the monument to Vasily  the cat, who once lived on Lizyukov Street. This street really exists. The monument to the kitten from Lizyukov Street in Voronezh appeared because of the famous cartoon with the same name, which was released in 1988. The idea of creating the sculpture appeared in 2000. Later, a sketch contest was held, where people shared their suggestions on how the monument of the kitten from this very street in Voronezh should look like. It was won by Irina Povarova, an 11th grade student. Her sketch was finalized by two professionals, Elsa Pak and Ivan Dikunov. In 2003, on the eve of the New Year, the monument to the Voronezh cat was unveiled.

People say that in order to make your wish come true, you have to caress Vasily and touch his paw. Nowadays, this kitten from Lizyukov Street has become a symbol of Voronezh and has firmly settled on local souvenirs. The address where the aluminium kitten and his girlfriend live is very easy to find. The monument to the cat is located in Kominternovsky district. The nearby landmarks are the DNS supermarket, and the former “Mir” cinema.

Another unteresting sculpture is the monument to White Bim with the Black Ear. This faithful dog is the hero of the story with the same name, written by the dog lover Gabriel Troyepolski. The story, published in 1971, tells  about the red setter Bim, who lived with a lonely war veteran. The dog’s monument was erected in Voronezh in 1998. Its authors were Elsa Pak and Ivan Dikunov, the same that finalized the design of the monument to of the Kitten on Lizyukov street. The history of White Bim did not leave them untouched. During the development of the composition, the sculptors consulted with Troyepolski. The monument to Bim is made of stainless steel with an addition of bronze, the latter has been used for his paw and ear. White Bim was made in real size. The monument is located in front of the Voronezh Puppet Theater. The address is 50, Prospekt Revolyutsii.

Guests entering Voronezh can see this mighty horse. The monument is located at the 491st km of the Moscow highway, next to the hotel “Yar“. The sculptor Maxim Dikunov, the son of the famous Dikunov-Pak sculptor couple, worked on it for a long time. Horse-lovers and grotesque lovers can appreciate the unusual view of a horse holding a broken rail in its mouth. According to Elsa Pak, this image symbolizes the eternal confrontation between nature and industrialization. The animal was named Yaryzh, and reaches a height of 3.5 meters, weighing 3 tons. It has no tail. There are rumors that instead of the tail, there are plans to  weld a ladder to the horses back. This way, it will be possible to climb on the horses back and take photographs.

For the treatment of greed and stinginess, Voronezh has an Anti-Parsimony chair. The idea of the sculpture came from the actor Alexander Nozhkin, but the therapeutic chair has only been installed after his death. This is the merit of his friends and associates Yuri Astapchenko, Sergei Gorshkov and the art gallery H.L.A.M. The art object was installed on September 30, 2011. The opening ceremony was attended by the Governor of Voronezh. You can take a look at it and take a seat on it in Platonov Square. It is located right behind the regional administration building, opposite the “Amital” shop.

Not only people engaged in science, but also ordinary passers-by are attracted by the creative execution of the sculpture “Professor and Student”. It is located in  the Leninsky district in front of one of the buildings of the VGTU (former Architectural and Construction University). The monument is dedicated to the famous architect Nikolay Troitsky and symbolizes the process of knowledge transfer.

The initiator of this sculptural group was the rector of the former VGASU, Igor Surovtsev. The development was carried out by V. Petrikhin and S. Guryev. The monument was unveiled on November 17, 2011. It was timed to coincide with two significant dates – N. Troitsky’s birthday and the International Student Day. The composition consists of a professor, a student and an empty chair. Anyone can sit down on it and listen to the conversation of the teacher with the student. Traditionally, to receive some knowledge, one should touch the bronze hand of the professor. This is often the practice with students before an exam.

The Puppet Theater in Voronezh is surrounded by numerous sculptures. In 1984, on a wide platform behind its building the heroes of Pushkin’s fairy tales were immortalized . E. Pak and I. Dikunov were engaged in the creation of a fairy-tale composition. Among the recognizable characters is the Stupid, the Stargazer who is bowing to King Dadon, the old man hoping to see the waves, and the Demon, carrying a horse on his shoulders.

On the noisy Plekhanovskaya Street, right in the middle of the sidewalk, sits a thoughtful stranger. A graceful figure with an unusual design makes you stop for a minute and sit next to her on a free bronze chair. Alexander Bubnov, the owner of the “Hermitage” interior design boutique, was the initiator of this composition, which was installed in 2008. In this way he wanted to draw the attention to his shop. His idea was realized by the artist Yuri Astapchenko.

The monument to Street vendor and Customer was created at the end of 2008. The sculpture conveys a picturesque scene – the purchase of a shawl. Among its participants are a street vendor, a saleswoman and a customer. The monument is located in the Northern district of Voronezh – in front of the market “Soborny” (Vladimir Nevsky Street). Nearby is the church of Ksenia of St. Petersburg. The sculptural trio is made of polymer concrete and painted with bronze paint. It weighs about 3.5 tons and is 2 meters high. The author is Andrei Terekhin from Voronezh. There is an unwritten tradition among market vendors: if you rub the mirror, the day will surely be profitable and successful.

On May 17, 2018 a new art object appeared on the street, a pig sculpture. The prototype of the new sculpture was a cute boar in the centre of Florence at the Mercato Novo market. Evgeny Rasskazov, the founder of the “Bronze Boar Hotel” was fascinated by the Italian animal, and initiated the installation of his Russian cousin. The owner hopes very much that the new monument will bring happiness and good luck to all those who will rub the snout of the bronze boar. The sculpture is located in the city center on Koltsovskaya Street.

10. Sculptures on the Nobel Laureates Alley

The university square has undergone a significant transformation lately. In September 2018, on the renovated Square of Scientists in front of VGU, the Alley of Nobel Prize Laureates was inaugurated. The sculptural group was created by Alexey Dikunov, son of Elsa Pak and Ivan Dikunov. At the moment, 5 objects have been installed, symbolizing the merits of Voronezh physicists and writers who received the Nobel Prize: Alferov is represented by his hetero-structures, Basov by a laser, and Cherenkov has an antenna installed as his symbol. Bunin and Sholokhov’s works are represented by book shelves with novels and stories. Next to each sculpture there is a mention of the year when the award was received.

The Aluminum fish is an entrance to “Papin Grocery Store” which sells produce fresh from the farm. It is 7 meters long and about 3 meters high. The composition was established by the shop owner Natalia Papina. Now the Karl Marx Street attracts passers-by not only because of the famous harmonica-house, but also because of this inhabitant of deep waters with a ring on her fin.

These unusual monuments of Voronezh make us look at the city in a new way, appreciate its uniqueness and attractiveness. Which of these monuments do you like the most? Write in the comments below! 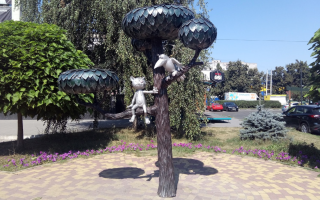