Voronezh, founded in 1586, was almost completely destroyed during World War II, and then rebuilt again. But this does not mean there is nothing to see in the city of Voronezh. If you want to touch the culture, are fond of architecture, military themes or history – visit Voronezh. Sights of the region do deserve a special attention. We will talk about what places you should visit in the city if you are here for the first time. Beautiful old streets with renovated buildings, monuments, parks, squares, fountains, temples and cathedrals – there are many interesting places.

The main square of the city originated in the second half of the XVIII century and until 1880 it was called the Horses Square, since it was here that the active trade of horses was done. Later the market moved away and the square became Starokonnaya (Old-horses). Then a parade ground and a street market were located here and only in 1937 the square became the main one. It received the modern name after the World War II.

The architectural ensemble includes the former House of Soviets (now the government of the Voronezh region), the library named after Ivan Nikitin and the Opera and Ballet Theater. The House of Soviets should have been more pompous and have a tower. However, during construction the project was revised. The appearance of the Nikitin Library was also changed. But the main idea – balancing the Opera and Ballet Theater – has been preserved. The buildings are located opposite each other, having the same height and decorated with similar columns.

In the center of the square there is a monument to V.I. Lenin (of course!). It was originally designed by sculptor N. V. Tomsky in 1940. During the war, the Germans took the sculpture out of the city. But even before the end of the war, Vladimir Ilyich again found himself on a pedestal, this time in concrete construction, by the project of S. D. Merkulov. And in 1950, Tomsky again did a bronze copy of his original sculpture.

2. Monument to Peter I

This is one of the first monuments to Peter the Great in Russia, which is not surprising since the emperor played a big role in the city life.

Originally, the monument was planned to be created at the beginning of the 19th century. Nicholas I approved it but refused to allocate money from the treasury. The townspeople tried to collect the necessary amount themselves, but this was not enough. Next time the governor of the city, N. P. Sinelnikov, returned to the idea. Alexander II approved the sketches of architects A. A. Cui and D. I. Grimm, having made several remarks, and allocated 2.5 thousand rubles from the treasury. The rest of the funds were raised by residents of the city. The monument was designed by A.E. Schwartz on the basis of the emperor’s real costumes and his death mask. In 1860, the grand opening of the monument took place. With one hand Peter points forward, while the other rests on an anchor, a symbol of opening the navy fleet in Voronezh.

The original sculpture was stolen by the Germans during the war. The current version of the monument to Peter I in Voronezh was restored after the war according to descriptions of contemporaries and surviving photographs. In January 1956 the new sculpture was installed on the original pedestal. The monument remained the same, but this time the emperor was portrayed young and full of strength. This was how he arrived to Voronezh at the end of the 17th century.

Ship-museum “Goto Predestination” is an exact copy of a real ship of the line of Peter the Great. Construction took longer than planned, but on the Navy Day in 2014, the grand opening of Goto Predestination took place with all the attendant traditions: a bottle of champagne was broken on the board, a flag was raised, and a cannon volley was given during the passage through the reservoir from the Admiralty Square.

The ship consists of 2 parts: metal bottom and wooden top. On board there is a museum dedicated to the sea theme: you can see in detail how the captain and his team lived.

4. House with an owl

Another popular place in Voronezh is the famous house with an owl. It was built by the architect M. N. Zamyatnin in 1912 for his family. The architecture of the building is noteworthy: it is made in the neoclassical style with modern elements. There are quite a lot of stucco and all sorts of symbols and mythical characters around the perimeter and the main facade is decorated with an owl sitting on a fir-tree branch. Some believe it is a symbol of strong marriage and well-being, hence the tradition of kissing lovers under sculpture established- they say it guarantees the eternity of the union. Others consider this bird a mystical symbol.

The images of the muses on the facade of the building are ambiguous: each has a star in their forehead, which, according to some historians, indicates that M. N. Zamyatnin belonged to the Freemasons Order. If you go back to the unusual stories associated with this house, there is a legend that exactly at midnight the owl leaves its habitat and flies off into the night, and then returns back.

Monument to a kitten from Lizyukov Street is located on the street of the same name in the city of Voronezh. The idea of ​​its creation came to the editor of the newspaper “Young Communard” after the release of the cartoon Vyacheslav Kotenochkin called “Kitten from Lizyukov Street”. Then a competition was announced in which 11th grade student Irina Povarova won.

According to her sketches, with a small change, in 2003 a monument to the cat was installed on Lizyukov Street opposite the Mir cinema. Sculptors I.P. Dikunov, E.N. Pak and their children worked on the project. The sculpture is a tree on which the Kitten sits and talks to the Crow. The monument is loved by all residents and the guests of the city. However, it was not without vandalism: the Kitten’s whiskers  are repeatedly torn off.

One of the most romantic places of Voronezh is located in the quiet center of the city. This is a Stone bridge, which is also called Humpback bridge. For more than a decade, lovers come here to make a wish and give the main promise. Newly  born families come here on their wedding day, smash a bottle of champagne, hang locks on the fence and then the new husband carries the bride across the bridge. It is not very difficult: its length is less than 10 meters.

But few people know that the Stone bridge in Voronezh has been here for more than 100 years. They began to build it in 1826 with money allocated by the governor.  During the construction of the fleet there was a huge amount of cargo carried on this road and it was completely worn out.

During its existence, the Stone bridge has barely changed. This is one of the few structures that survived the WWII. After the last restoration, the parapet was made from stone again. And in order not to ruin the tradition, a metal gate and a tree for lovers’ locks were arranged nearby.

The Blagoveschenskiy (Annunciation) Cathedral in Voronezh is one of the most beautiful temples in the city. Construction took 10 long years, and in 2009 the first service was held. The opening took place on the day of memory to Saint Mitrofan, and later a sculpture was erected in front of the cathedral to the first local bishop.

The main temple of the city was built to replace the three cathedrals destroyed by the Soviet government. It is made in the style of Russian-Byzantine architecture: white-stone with huge dark domes and golden crosses. Parishioners and guests are amazed at its size: the highest point is elevated 95 meters above the ground. It is the third highest Orthodox church in the country and one of the tallest in the world. Interestingly, around the square in which the cathedral is located, there still is a fence with Soviet symbols.

Like many churches in Voronezh, the Annunciation Cathedral conducts daily services. On Easter week, anyone can climb to the very top and ring the bells.

Alekseevo-Akatov monastery was not always female. Initially it was the only monastery in the city for men. Its history began in 1620, when it was built near Voronezh as a sign of gratitude for the victory won over the troops of the Lithuanians and Circassians. It was named after Alexy of Moscow and by the name of the place where it was built – Akatova Polyana.

Initially it was a small wooden church, but eventually a stone temple was built in its place, then the Assumption Church and a lot of land was attached to the monastery. A special time came to the monastery during the reign of Catherine II: it was assigned a second significance class, and the state began to allocate money for its maintenance. Over time, the monastery was expanding. However, during the revolution it was ravaged, while still continuing to serve. And only during the Soviet era it was closed. Restoration began in the 80s of the twentieth century. Some parts were restored, some were rebuilt. In 1999 one of the most beautiful churches of the city, Vvedenskaya, joined the monastery. It meets all the requirements of the Rastrelli school.

Brinkman Garden in Voronezh appeared in XIXth century. Once there was a dacha of Elizaveta Krasouskaya, known for her early marriage and divorce. After this event, Colonel German Karlovich von Brinkman became her guardian. Eventually, Elizaveta sold the dacha to him, and later Brinkmans opened a wonderful garden with a rotunda, pavilions, dances and other entertainments. During the Russian-Turkish war a hospital was set up here for wounded soldiers, and during the World War II there was a German hospital here.

Unfortunately, little has survived from the once beautiful park. However, in 2012 in the Voronezh government had an idea to revive the garden and make a Park of Lovers here. Eight concepts were developed, but finally the ninth was adopted and even began to get implemented. They cut down the old trees, cleared the area, put up a fence with a clock and began to build a rotunda. However, then the restoration was suspended. Today it is a partially cleared park area which is waiting for the continuation of the restoration.

Many visitors mistakenly believe that the monument of Glory is a big red pyramid, located almost at the entrance to the city, but it is not. The real Monument of Glory is located about 500m from the pyramid. The authors of the monument are A. G. Buzov and F. K. Sushkov. This is a bronze composition depicting the profile of a dying soldier. And right in front of him a sad woman is breastfeeding a baby. Perhaps these are thoughts or images of a soldier before death.

Large massive steps lead to the monument. The names of many dead are engraved on the walls next to them, as a mass grave is located right under the memorial. In the corner of the composition there is a large star in which the eternal flame is burning.

We briefly talked about the 10 most popular attractions of Voronezh. Read other articles on our website to learn more about other interesting places in the city of Voronezh. 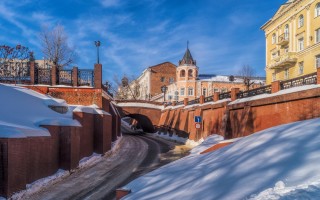