The city of Voronezh, one of fifteen Russian million-people cities and a major regional economic center, has experienced many glorious victories and ordeals since its foundation till the present. It was destroyed and rebuilt more than once. The history of Voronezh spans more than four centuries. The city has many monuments reminiscent of past times and people who played an important role in its fate. Modern Voronezh is a beautiful city which lives a vivid life and, as always, overcomes difficulties with dignity focusing on the future.

Many historians believe that the first descriptions of the settlement here date back to the end of the 12th century. However, these hypotheses did not find sufficient confirmation, therefore, the date of foundation of Voronezh is considered to be March 1, 1586.

The decree on the construction of a new fortress came from Fedor Ioanovich, who reigned at that time. The place was chosen because of the natural and geographical factors. The construction of the town was done under control of governor S.F. Saburov and cost the sovereign treasury 140 thousand rubles in gold. In 1585, a guard town appeared at and  from March 1, 1586, it became known as Voronezh by the order of the boyar N.R. Yuriev

The emergence of a military settlement was necessary primarily due to the need to protect the southern borders from the devastating raids of the Nogai and Krymchaks. Many Don river Atamans arrived to serve in the city. The army consisted of residents of neighboring counties. The border guard regularly sent cavalry units from the fortress to the border steppes to defend the area. Due to the good location near the confluence of two navigable rivers (Don and Voronezh), the city, recently built for military purposes, became a fairly large trade hub in a short period. In 20 years from the date of its foundation, there were about 7,000 inhabitants in the city, which is confirmed by records in the Patrol Book.

Voronezh in the XVI and XVII centuries

In troubled times known as smuta  (at the beginning of XVI century) the town people headed by the boyars recognized the sovereign False Dmitry I, and later the False Dmitry II, who found a short-term refuge in the walls of Voronezh in 1610.

But the head of the Polish-Lithuanian Commonwealth, King Sigismund, whose troops occupied Moscow, was not recognized by Voronezh citizens as their ruler. They defeated the Cossack army of the ataman Zarutsky who took the side of the Poles.

At the beginning of the second half of the 17th century, after the smuta times were over, the Belgorod Guard Line was built. Voronezh became one of the fortresses. During the riots that broke out in 1670-1671, the boyars decided to fortify the fortress walls in the fears of the rebellious peasants. So the rebel troops of Stepan Razin could not enter Voronezh.

Voronezh during the time of Peter the Great

A new, fateful stage in the history of the city began when it became the cradle of the glorious Russian fleet. In 1696 the Russian emperor Peter the Great decided that Voronezh was the most suitable place for the construction of the fleet because of the convenient waterway to the Sea of ​​Azov along the rivers Voronezh and Don and a lot of woods along the banks of Voronezh river.

Over the next 25 years Peter the First lived a total of about 500 days in Voronezh. During these days, the small town would actually turn into a temporary Russian capital, where the closest comrades and household members of Peter and representatives of foreign powers came. Until 1709, the construction of dozens of ships was completed at the shipyard on the river bank.

European and Russian shipbuilders settled in Voronezh. The Admiralty was built here. In 1703, a special school was established to train naval officers. The fleet was built for operations at the Sea of ​​Azov. It participated in the capture of the Azov fortress belonging to the Turks and in the Kerch campaign. It was in Voronezh that the initial experience of building ships was gained. It was used later during creation of the Baltic Sea and Black Sea fleets.

In 1708, the Azov province consisting of five provinces, including Voronezh, was formed. It was ruled by F. M. Apraksin. In the year of the death of Peter the Great, the city of Voronezh became the center of the province instead of Azov.

With the advent of the XIX century, public education began to develop in the city. Gymnasiums and colleges appeared. The printing house was established. In 1802, the first Voronezh theater opened. The streets now were lit with the candle lanterns.

In 1868, the railway communication with Moscow was established. Two years later the railway connection with Rostov-on-Don was built. Voronezh gradually became an industrial center. The plants for agricultural engineering, mechanical, iron foundry, engineering appeared. At the beginning of XX

At the beginning of the XX century, the population of one of the largest provincial centers of Russia was 61,000 people. Half of the 5,500 city buildings were stone.

With the beginning of the World War I, a reserve of Russian troops was formed at Voronezh area. The factories from the western regions were moved here.

After the revolution and during the war

In 1917, the history of Voronezh, as well as the whole Russia, experienced the fundamental changes. From October 30, the city was ruled by the Bolsheviks who came to power as a result of the October Revolution.

During the years of industrialization, Voronezh became one of the major scientific and industrial centers of the country. The construction of factories continued. Aviation, rubber, excavators began to be produced. On the 2nd of August, 1930, an airborne assault landed for the first time during an exercise near Voronezh. After that, the city is considered the birthplace of the airborne troops.

After the beginning of World War II, many factories switched to military production. By the winter of 1941 most plants were evacuated from the city beyond the Urals. In June 1942, regular units of the German army approached Voronezh. For 212 days, defensive battles were held in the city, from the moment of the formation of the Voronezh Front in July 1942 and until the complete liberation of the city by the General I.D. Chernyakhovsky army. Voronezh was destroyed by 90%. Part of the population was hijacked into the regions occupied by the Nazis. However, the Voronezh river was never forced by the German troops. Active defense prevented part of the German troops from moving to Stalingrad and helped the legendary city to stand and win.

In the victorious 1945, the revival of Voronezh began. The restoration work was completed by 1959. The newly rebuilt industrial enterprises were commissioned, aircraft construction and the production of rocket engines was developed. In Voronezh, a series of supersonic passenger TU-144 was produced and the country’s first-ever Airbus IL-86 was built.

During Soviet times, the construction of housing continued. A huge water reservoir was built on Voronezh River. In 1986, the 400th anniversary of the city was celebrated. Voronezh was awarded the Order of Lenin. Many monuments and historical buildings were restored to the anniversary.

In the 90s of the last century, when the USSR ceased to exist, many large Voronezh enterprises sopped production. Their leaders began to look for ways to survive, joining all sorts of holding compnies. The condition of the housing stock and roads has worsened. In 2009, the city tram transport was completely stopped.

Currently, the situation in the city has improved significantly. Shopping centers, business centers, supermarkets of well-known chains and private residential complexes are being built on both banks of the Voronezh Lake. Parks and squares are developed, historic buildings are being restored, good road conditions are maintained. Voronezh became a modern, comfortable city combining its historical values with modern European-style standards of living. 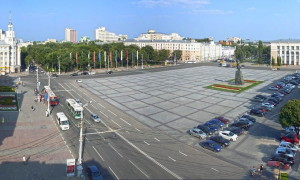 Taxi in Voronezh: phone numbers, apps, rates
Below is a list of popular taxi services available in...
27.04.2019

Voronezh in the Palm of Your Hand – Map and Souvenirs
Hand-made souvenir map of Voronezh for tourists. Streets and buildings,...
02.05.2019
Random city picture: