Voronezh is a large city, with many tourists and transit travelers passing through. The numerous museums of Voronezh are one of the reasons to stay here a bit longer and see a variety of artistic, military and historical exhibitions and at the same time to learn interesting facts related to the life of the city. The annual “Night of Museums” (in 2019, it is on the 18th of May) gives an opportunity to visit many museums for free. We will give you a brief description of the museums with photos and addresses.

The museum is located in a Baroque palace built at the end of the 18th century on Prospekt Revolyutsii, 18/1.

Founded in the 30s of the past century, the Kramskoy Art Museum contains over 20 thousand unique pieces. Among them are sculptures, paintings, unique porcelain objects, as well as decorative works. Works of art from the Ancient East and Greece are presented separately. The collection of ancient Egyptian art is the oldest in Russia! Details about the entrance fee can be found at the official website of the Kramskoy Museum mkram.ru/eng

The construction of the first vessel of the Russian Navy, named “Goto Predestinatsia” (“God’s Predestination”) was started at the Voronezh shipyard at the end of the 17th century. Peter the Great personally supervised the construction. The ship-museum “Goto Predestinatsia” is a copy of the original ship. It is located near the Admiralty Square. The grand opening of the ship-museum took place in 2014. Its exposition includes more than 700 artifacts, including tools, clocks, coins and tableware from the reign of Peter the Great. The ship is equipped with wax figures of sailors, creating an atmosphere of antiquity. The official website of the museum ship is http://museum-vrn.ru/muzej/goto_predestinaciya/istoriya-gotopredestinaciya/

Opened at the beginning of this century, the Diorama Museum was created interested ub history, the veterans of the Great Patriotic War and their descendants. The main spotlight of the exposition is the mini-diorama dedicated to the battles of 1942-1943, which took place at the Chizhovsky foothold. The second floor offers visitors the chance to get acquainted with the history of the Voronezh aeroclub, which later became the foundational unit of the Airborne Troops. Also in one of the exposition halls, you can find a collection of all the documents and items of the Navy of the period of the reign of Peter the Great. Guests can see the anchor of a Turkish frigate and the ordinances of the king himself. Next to the museum building, you can also find some real military equipment (tanks, cannons and even a real helicopter). The official website of the Diorama Museum is http://diorama-vrn.ru.

On Stepan Razin Street in Voronezh, there is an interesting Arsenal Museum dedicated to the 212 days of fascist occupation of the city. It was opened in 1983 in the former merchant Gardenin’s cloth factory building, built in the 70s of the 18th century. In the post-revolutionary period, the building was used as an armoury. The building has miraculously survived during the Great Patriotic War and nowadays it is still in its original state. The exposition of the museum in Voronezh contains exhibits of the period of WW II, between1941-1945. Here you can see German leaflets calling for surrender, wartime drawings, findings from the battlefield, and many more – telling the history of the city. The official website of the Arsenal Museum can be found here: museum-vrn.ru/muzej/arsenal/istoriya-arsenal.

The oldest museum in Voronezh and its region was opened in early Fall of 1894. Now it includes five sectors (buildings): “Ship-Museum”, “Governor’s House”, “Durov Museum”, “Arsenal” and “School of the Blind”. The exposition of the Local History Museum (formerly the “Museum of Revolution”) contains more than 3000 artifacts, for which 18 halls were necessary. The main building (“School of the Blind”) is located at 29, Plekhanovskaya Street. The most valuable are the numismatic, philatelic and ethnographic collections. Visitors can get acquainted with the presented samples of weapons, unique porcelain, rare editions of books, ceramics, etc. Offcial website: museum-vrn.ru.

The Durov Museum is a mansion where the great circus artist A. L. Durov lived at the beginning of the last century. The architecture of the mansion combined styles of different cultures and eras. Nowadays, in addition to the main structure, the museum complex of science and creativity contains a grotto with a large aquarium, ancient statues and fountains. The collection of artifacts is constantly replenished: private citizens give the museum photos and unique original paintings. The main focus of the museum is the circus culture. A large number of articles and posters from the beginning of the 20th century plunge visitors into the depths of that era.

The Literary Museum named after Ivan Nikitin includes several historical buildings, like the Meshchanskaya Administration (3, Plekhanovskaya Ulitsa) and the House-Museum of the Russian poet Ivan Nikitin. The exhibition tells about the life of the poet and his creative path. Here you can learn about Nikitin’s comrades-in-arms who participated in the development of culture of their native city in the 19th century. Visitors can get acquainted with the original objects used by Nikitin, and rare editions of his books, as well as the wonderful graphics of “Places of Nikitin”, painted by F.P. Zvonarev. The museum constantly hosts various literary exhibitions organized by Ivan Nikitin’s fans. The museum website is: http://muzeinikitin.vzh.ru.

The commemorative apartment of the famous folk singer is located at number 9 on Lenin Street. The exposition of the Mordasova Museum contains original household items, a rich archive of fan letters, a collection of photographs of the singer and her friends. Here are the costumes in which Maria Nikolaevna performed, a collection of song lyrics, videos with films and programs with her participation. During the sightseeing tour, the guests get acquainted with the personal and creative life of the singer. The first hall is dedicated to Mordasova’s young age, her artistic carreer and the concert tours she has done in her life. The exposition of the second hall tells about her various stage characters, jewelry, costumes and hobbies. At the final stage of the tour, everyone is allowed to try on copies of M.N. Mordasova’s costumes. The Museum website: muzeinikitin.vzh.ru/muzej-kvartira-m-n-mordasovo

In July 2001, the puppet theater “Jester” opened an amazing Museum of theatrical dolls in Voronezh. The beginning of its formation was a collection of Alexander Veselov, the director from St. Petersburg, who collected a huge number of “retired” puppets. Today the exposition of the museum counts about 4000 specimens of theatrical puppets, the most interesting and special of which are the Sicilian puppets, Prince Gototkachao from Indonesia, as well as a shadow doll brought from Bolivia. The Puppet Museum is open to the theater’s visitors on the days of performances.

The unique Museum of Forgotten Music located in the Machine-Builders’ House of Culture is the creation of the couple Sergey and Istina Plotnikov. They created and supported this museum, which brings back traditional ancient music and forgotten musical instruments into modern culture. The instruments become part of the museum in different ways. Some people bring their “great-grandfather’s legacy”, which acquires a second life within the walls of the museum. Some copies have to be bought, and the most unique ones are made by Sergei himself, using the preserved drawings or descriptions from the past. Thanks to his efforts, the collection has been enriched with Russian pipes, psalteries, mini-violins, lyres, horns and other artifacts.

A tour of the Museum of Forgotten Music is a lecture combined with a concert. Diversity of folk instruments and musical traditions is illustrated by the demonstration of the techniques of how to play them and their sounds. In addition, visitors are given the opportunity to “jam” on bagpipes or psalteries. Museum website: https://vk.com/club11761018

In this article, we described the most popular museums in Voronezh. Whether you are in Voronezh on a visit or live here, we recommend you select the museums you are interested in and get to know their buildings and expositions! 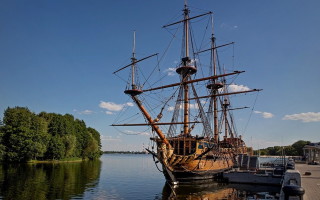